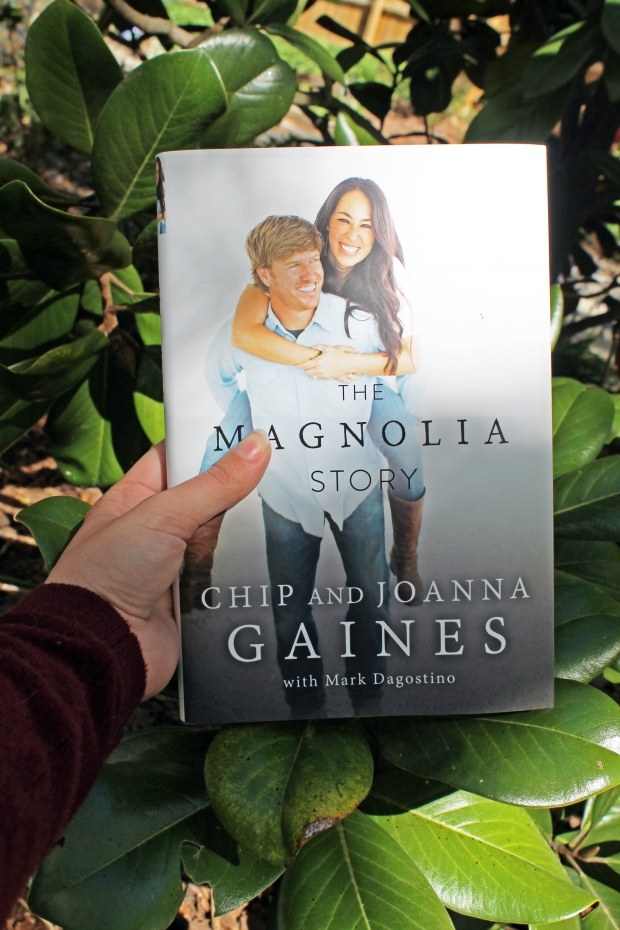 The Magnolia Story is the first book from Chip and Joanna, offering their fans a detailed look at their life together. From the very first renovation project they ever tackled together, to the project that nearly cost them everything; from the childhood memories that shaped them, to the twists and turns that led them to the life they share on the farm today.

If you know anything about my T.V. intake you know that Fixer Upper is one of the only shows I keep up with. It’s not a plot line show, but it’s important to me none the less. As that Instagram famous mug said: Joanna Gaines is my spirit animal.

Honestly I love their family just because of the type of life they live. They are successful, but they value family, work ethic, and faith. They’re scandal free and just generally good people. I think they’re a beautiful family to have in the spotlight during this Kardashian era world we live in. I would say I’m not taking a dig at the Kardashians, but let’s be real, I am. I think most our role models and celebs don’t deserve the roles we give them in our daily lives. Are some actresses talented? For sure! should they all be looked up to? No. No. And again, no.

That’s one of the reasons I bought this book, to see if the one “celebrity” person I really did admire was, well, as good as I thought? I wanted to see if they were really deserved my hashtag #goals on their instagram posts.

Spoiler alert: They do.

This book pointed out somethings I was already aware of. I could never marry a man like Chip, for starters, he’s a wonderful man but he’s immature in a lot of ways. No surprise there. But it let me into their success story, it opened me up to their short comings, and it was refreshingly honest. It felt real and raw, but above all else hopeful and grateful. It was such a positive book, even when it talked about the bad stuff. I know some of that comes from retrospect, but some of that just comes from what type of personality you have. Some of the bad stuff I’ve been through I’m not very positive about even now that I know why it was necessary. It’s just a hard thing to do.

This book didn’t read like some of the celebrity books I have read because the Gaines aren’t the most typical celebrities and it didn’t read like a business book because it had too many personal details. It was a perfectly balanced memoir.

If you’re a big Fixer Upper fan you’ve probably already read this book, it’s been out a bit, but if you haven’t I think it’s well worth your time! I gave it four out of five stars.